blogcatalog
Have you ever heard or read the word "vellichor"?  I had not, until today.

Of course, the first thing we do in today's world, when we are unfamiliar with something; what do we do? We Google it!

What a profound word for such a subtle and elusive perception, even, when we are not aware of the perceiving!

Have I confused you yet?

Many of you writers may be familiar with the website WordSalad. It popped up in my Google search. Low and behold, vellichor is the first word listed on it's 12 Beautiful Words You've Never Encountered page.

Quoting the definition given on Word Salad (though I found the exact definition on several other sites): "n. the strange wistfulness of used bookstores, which are somehow infused with the passage of time—filled with thousands of old books you’ll never have time to read, each of which is itself locked in its own era, bound and dated and papered over like an old room the author abandoned years ago, a hidden annex littered with thoughts left just as they were on the day they were captured."

Not to be difficult but weren't all words 'invented'? Though one wonders if some words, like the chicken and egg, came before the meaning or after the meaning!

Though I never heard 'vellichor' prior to today, I have felt the sensation of vellichor.  Haven't you felt a slight sense of melancholy when walking through a Used Books store?

Many years ago, a dear friend gave me a book to read. It was about consciousness. I'm not sure of the exact title but the cover was inviting; a white background with a glowing rising sun. It was just the type of book I love to read.

I tried reading it many, many times. After a page or two, I would become overwhelmed with dark, somber feelings. I would put the book back on the shelf.  It sat for a long while, untouched.

My friend inquired if I had read it. "No, I apologized, "I can't hold it for more than a minute or two. I've tried, but I read the same pages and just feel overwhelmed with yuckiness!"

He examined his bookcase and gave me a different copy of the same book, then explained that the man who had given him the one he gave me had committed suicide about six months after he read the book. The last two years of his life had been tragic, filled with many losses.

The man's energy and feelings had been left in the book. I was feeling his loss and depression when I held the book, making it too uncomfortable to read.

When we walk into a book store, we are enveloped by a space filled with the energies of the prior readers left behind in the books.  There is happiness and joy, contentment. These is sadness, depression, futility.  So many emotions that we may experience either from the book or from our own situation in life while we are reading the book.

Vellichor sounds so appropriate for the feeling of walking into a used book store. Like velcro, the emotions are stuck to the pages they have touched. 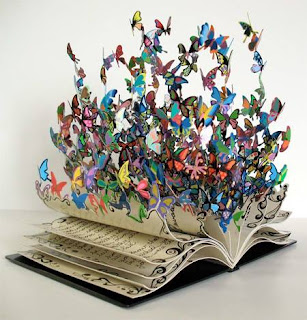 What do you think?

Have you ever experienced an uneasiness or maybe, imagine, joy, when reading a used book?

p.s. If you go to WordSalad and read 12 Beautiful Words You've Never Encountered, check out word #3; Moledro! Been there. Might have to do a Friday Moledro group post!