The Voice of Prophecy and a Spanish Inheritance... 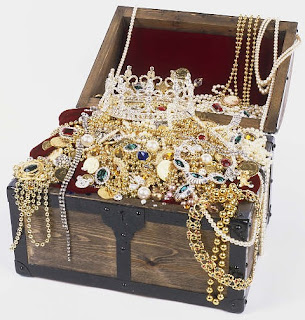 Today we got a letter in the mail from a Spanish lawyer (I mean, he lives in Spain) purporting a great family fortune lies in wait for my husband.  We know that it is a hoax, of course, but on a whim we went looking for the Spanish branch of Ed's family (Zirkwitz) that has apparently passed away with no heir, no other person on the planet with the same surname to claim the substantial funds.  For whatever reason, I went well beyond Google's first page (I actually found some other interesting quasi-genealogical information translated from Polish into sorry English about an Evangelical Lutheran Pastor in 1897 Poland, we believe to be the father or grandfather of Ed's cousin who lives in Germany).  And there, on page 3, was an odd little piece of script from the Adventist Archives that mentioned that in 1971 the Voice of Prophecy Bible School had granted a certification of completion to its 500,000th Bible Studies student... my young boy-husband at age 21.


You can imagine how excited we were to find this blast from the past!  We made something like eleven moves in the first five years of our marriage so this particular journal article (from page 5 of the Southern Union Record,) never made the cut.  I DIDN'T study the Bible with VOP then (or ever) and wasn't baptized for another 22 years after this article was printed on December 11, 1971 (oddly enough, the first birthday of our oldest child).  I do, however, have a recollection of the photographer coming to take Ed's picture for event.  About four years ago at the Hope Camp Meeting Ed had the opportunity to talk to the Voice of Prophecy representative there and told him this story and we had our picture taken then, both of us.  Whenever we mention that Ed was the 500,000th student of the Voice of Prophecy Bible School, people look at us a little sceptically.  I praise the Lord for his good solid start with the VOP on KARI (Blaine, Washington) back in 1971 and for his willingness to continue to follow his Lord and Saviour until the end.  God wants us to realize just how great a treasure we have been blessed with-- a monetary fortune could never measure up! 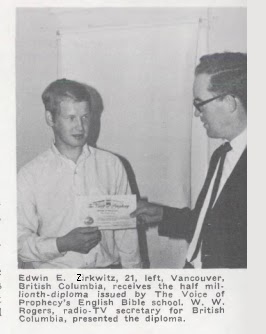 Bible  school  records  show  that  Zirkwitz  began  the  Faith  Bible  course  May 27  and  completed  the  40-lesson  course just  three  months  later.  Upon  discovery  that Zirkwitz was  the half-millionth  graduate,  W.  W.  Rogers, British  Columbia  radio-TV  secretary, was  asked  to  deliver the  course  diploma
and  extend  to  him  the  congratulations  of  the  entire  broadcast  and  Bible school  staff.