A Walk Along One Fullerton

The other day I was showing a friend around Singapore River, One Fullerton and the Merlion Park. It has been one of my favorite spots at night where you get to dine by the Singapore River in the twilight. Not that Singapore River is in any way spectacular but the atmosphere and ambience at One Fullerton all blend in magically with the soft lighting to make it an ideal romantic dining place with loved ones or friends. If you are looking for coffee, you can find Starbucks there too. Talking about Starbucks, I can still smell the aroma of the coffee; it really smelt heavenly.

One Fullerton at the Singapore River is not only a favorite spot for some Singaporeans where they get to savor a range of good restaurants offering international cuisines to local Singaporean dishes but also a good spot for tourists after a long day of malling and walking around Singapore.

If you like seafood, I would recommend the No Signboard Restaurant, a name given by the 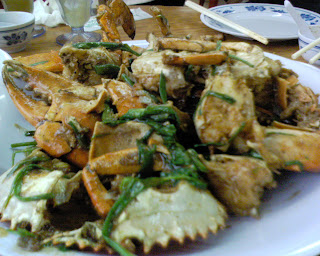 customers. Be adventurous to try the famous Singapore Chili Crab or to try one of their specialities, the White Pepper Crab (take a look at the picture on your right). However, I have to warn you that it might be a little hot and spicy for people who do not take spicy food.

For those who are not into the fanciful restaurants and fine dining, I challenged you to buy your own food from the nearby Lau Pat Sat (which is about 5-10 minutes walk from One Fullerton) and have your dinner, the picnic style, at the Merlion Park. Imagine casually eating under the twilight, with the sea-breeze blowing gently in your face and the sound of the waves lapping against the seawall. Not to mention the stunning backdrop of Singapore's skyline at Raffles Place on one side and the Esplanade on the other side. 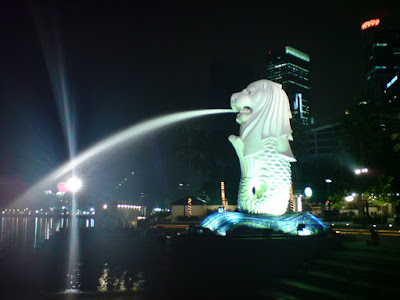 Of course, not forgetting the Merlion. From Uniquely Singapore, the Merlion was designed by Mr Fraser Brunner, a curator of the Van Kleef Aquarium, the lion head represents the lion spotted by Prince Sang Nila Utama when he re-discovered Singapura in 11 AD, as recorded in the "Malay Annals". The fish tail of the Merlion symbolises the ancient city of Temasek (meaning “sea” in Javanese) by which Singapore was known before the Prince named it “Singapura” (meaning “lion” (singa) “city” (pura) in Sanskrit), and represents Singapore’s humble beginnings as a fishing village.

Oh, before I forgotten, please remember to keep the place clean and tidy after you are done with your picnic or you may be fined for littering. 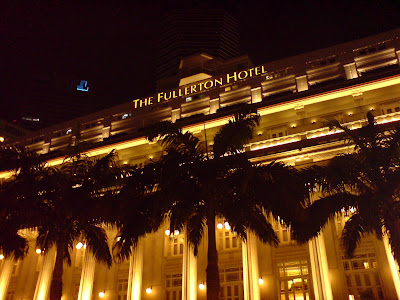 From the Merlion Park, you can also have a good view of the Fullerton Hotel, which is one of the premium 5-Stars hotel in Singapore. Back in 1928, it was the largest building ever built and cost over 4 million dollars. In the early days, the building was occupied by the General Post Office. It was also a place that witnessed many election campaign rallies. 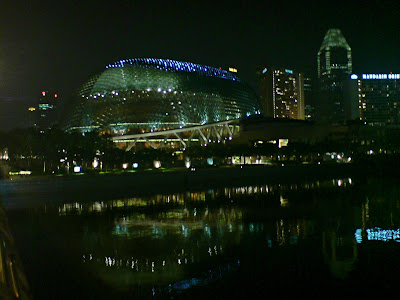 While I was taking a walk along One Fullerton toward the direction of The Esplanade, the theatre on the bay. I can't help but fell in love with it; the lighting of the building and the reflection of the building on the Singapore River was simply beautiful. I managed to take some photos of it but it seems nowhere close to seeing it with your own eyes. The photo was taken using Sony Ericsson K810i Cyber-shot phone in the twilight landscape mode. The colors appeared closest to the naked eyes.

The whole tour starts around 10 pm and ended around midnight. If you want to take photos of the Merlion in the Merlion park, you do have to be there earlier because there will switch off the lighting and the water splashing from the Merlion at certain hour. Oh ... how can you get there? You can either take a cab ride or you can take the MRT to Raffles MRT Station and it will take you around 5 minutes to walk to One Fullerton.