We are all completely beside ourselves, by Karen Joy Fowler 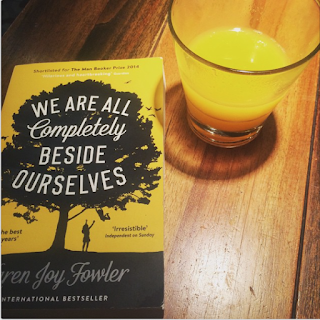 "Ohhh I loved that book! Are you enjoying it?", asked the Air New Zealand Flight Attendant.
"I loved this book", said Wildette on Instagram.
"Ohhh I was thinking of reading that. Is it good?", asked my sister.
"My friend said that was his favourite book", said the guy I was dating.

What a hype! Well guys I did like this book. But not enough to rave about it. And also not enough to finish it quickly. This book has been my companion on 2 trips to LA, several work projects and an entire relationship from roses and hearts to fights and tears.

The book is narrated by Rosemary who seems not to like herself very much. In fact, it's pretty hard to understand her actions and the reasons she does what she does at the beginning of the book. We don't know why she is drawn to the dramatic and self-centered Harlow. Nor why she chooses to smash plates and end up in prison. But it's obvious that this is a girl struggling to fit in.

It's only when Rosemary starts to face her past that things slowly start coming into focus.

Rosemary once had a much beloved sister called Fern. Then one day Rosemary is sent away to live with her Grandparents. She is hurt and confused and, worse still, returns home to find that Fern is gone. Her brother Lowell insinuates that it is Rosemary's fault, "if only you could have kept your mouth shut for once". But what did Rosemary do? Rosemary's mother becomes depressed and Lowell goes off the rails before disappearing. Yet none talks about what has happened to Fern.

I don't want to give away the massive twist in this book. That's part of the fun of it. So read it yourself. I found that as the book went on it became more and more interesting and more and more clear was the psychological scars inflicted on Rosemary by her upbringing and by the choices of her Psychologist father and her mother.

The book is a study of the effects of upbringing and asks questions of childhood culpability, good and evil and forgiveness as well as animal welfare.

So my verdict? We are all completely beside ourselves is a very interesting read. But because Rosemary is such a difficult character, full of guilt and loneliness and dark shadows I failed to warm to her. Just as the children in her class wanted to turn away from her, so do I. Poor girl. I give this book a 7/10 as a result.