Weeping with the Saints 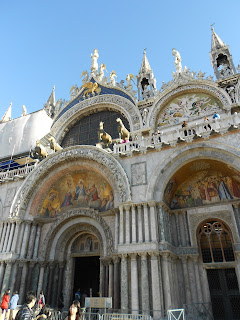 San Marco's Basilica stands solemnly facing St. Mark's square.  A delightful example of Byzantine architecture, it was formally completed  around the year 1071.  The art clinging to every orifice of its structure is dizzying.  Every square inch of every pillar, cornice, floor tile, doorway, boasts a standing ovation to the intricately detailed creative genius of artists long gone.

Attached to the Doge's palace, it forms one wall of the box-like courtyard of the residential dwelling of Venice's most powerful guardian, the Duke (Doge) of days gone by.  The Venetian sun strikes its spires and turrets and ornate curves and corners with a religious penetration that showcases its highly decorated surface to perfection. 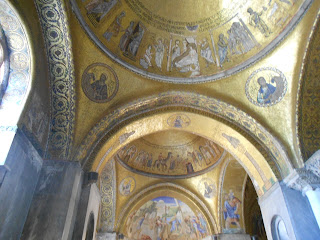 Inside the vestibule, a hush descends over the growing crowd of tourists, milling and craning and snapping with cameras on necks and wild wonder in eyes.  I strained to name the stories as ancient characters played out Biblical history on ceiling and floor and pillar, a curtain-call to the Pentateuch.  I noted a naked Noah as his sons backed their way toward his couch, cloak slung over their shoulders.  I spotted prophets caught in the act of scribing on golden scrolls.  Here David with a flute, there a mighty battle enacted with glaring detail, they paraded their moment in archived era, surrounded by curly-cues and mosaic whimsy. 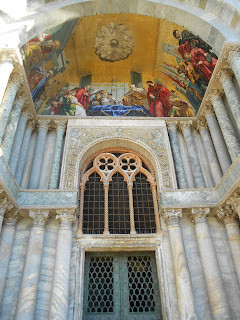 My sister is the well-travelled one. At every new stop in our adventure, she searched my face to glean there the wonder, the awe, the delight she had come to expect.  So as we entered the venerable halls of that spiritual site, her eyes sought mine to ascertain my reaction.

She wasn't disappointed.  The tears rolled freely down my cheeks, spilling from eyes wide with reverent and humble pleasure.  I shuffled in time to the tourist dance, looking, looking, always looking.  I was trying to memorize not just what I saw with my eyes, but also what my heart was seeing.  Feeling.  That sense of veneration, of history, of seeing God in the carved strokes in wood, the polished curve of marble, the brightly-clothed figures solemnly proclaiming allegory from their perch on the ceiling and walls.

I won't soon forget the emotion that gripped me that day. 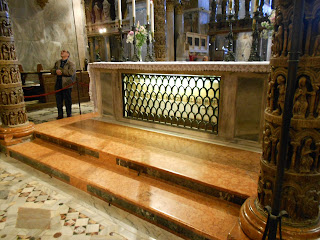 Behind the altar lies a box.  It is said to hold the remains of Saint Mark, whose winged lion emblem adorns so many Venetian structures.  I am not Catholic, but again I was moved.  Here was a man who lived to serve His Lord - and I felt a quiet reverence in thinking thoughts about his life, his calling, his service to his world.

Emerging into the sunshine was like breaking out of a chrysalis.  I felt as though my egress marked a 'me' in a new form - a butterfly floating on new knowledge, new experience, new air.

I felt as though I walked taller.  Strode with more purpose.

Perhaps weeping with the saints had washed some of the dust from my soul.