What I've Done, What I Plan to Do

I haven't posted anything here since November 12, 2010. For several reasons.

I caught what's probably the flu around that time: and haven't really shaken it since. I'm pushing age 60, and next year I am not missing the flu shot.

That's also when I started having problems doing creative work. Dealing with some sort of an influenza-like infection didn't help any, but there may be more going on than that.1

This post is a sort of status report, telling what's changed in my plans.


Apathetic Lemming of the Month

The Lemming's blog is fun to research and write for: but I've decided that it's time to cut back a little. (Apathetic Lemming of the North (February 21, 2011))

From May 23, 2008 to November 5, 2010, I'd been cranking out a 250-word post each week in Loonfoot Falls Chronicle-Gazette, yet another blog. The idea was to develop the setting, a small town in Minnesota. Quite fictional: although it's at least as accurate a picture as Garrison Keillor's Lake Wobegon. I actually live in a small town in central Minnesota: and that's almost another topic.

Then, in mid-November of last year, I realized that I was having a hard time creating new posts - and not all that many folks had been visiting that particular blog. Since I had a modestly rich set of characters, settings, and situations established: I haven't written anything for that blog since.

The odds are pretty good that I'll restart the Gazette column - and I'm getting to that.


Only So Many Hours in a Day

Some creative types work in a studio - either as a member of a team led by someone else, or as the chief 'idea' person. There's nothing wrong with that, in my opinion.

As I recall, the big creative names in Renaissance Italy, besides being talented artists, ran businesses. These days they'd be commercial artists, interior designers, and a plethora of other job titles. They didn't necessarily do all the work on every piece that had their name on it - any more than Walt Disney or George Lucas have been doing all the work in movies they've made.

Like I say, I have no problem with that. The idea, as I see it, is to get a movie, or a comic strip, or something else 'out the door,' and if it takes a team to do it well: it takes a team.

Which doesn't have all that much to do with what I'm doing.

I'm one person. I've gotten help, from time to time, from members of my family: but there isn't much that I write or display that I didn't make myself.

That's kind of nice for my ego - when the results come out well - but it puts very real limitations on just how much I can expect to get done. Which is why I've cut back on how much I write each day.


The World of Loonfoot Falls

As I wrote those posts about Loonfoot Falls, Minnesota, I found I was collecting material about the semi-fictional world the town was in. I made notes as I went along, even when the idea never made it into one of those 250-word posts.

There's a big difference between some nifty ideas, and a story or picture involving them that someone else might find interesting. Or, I hope, entertaining.

What I've started working on is playing with that 'extra' material from the Loonfoot Falls project, and seeing if I can make them into stories, or illustrations: or something.

Which is part of what I was working on today. Here's what I have to show for most of an afternoon's work on the world of Loonfoot Falls: 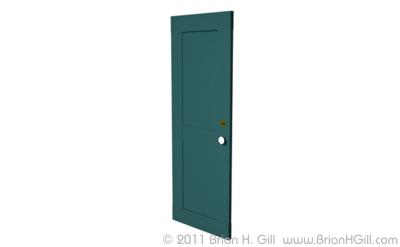 That's right: It's a door. An ordinary door that someone's apparently painted green. Or some color that's sort of green.

Not very impressive, by itself.

1Something quite unpleasant happened around Christmas time, back in '60s, and I the way I get frantic around that time of year may be more than the usual cultural craziness. I discussed that in another blog. (A Catholic Citizen in America (January 28, 2011))
We use cookies to improve user experience, remember your preferences, and analyze website traffic. By continuing to browse this website, you consent to our use of cookies as outlined in our Privacy Policy.