What POPS with Pop Culture and Celebs

Today in the Topicability blog, we are spotlighting the hugely fun and topicable topic of Pop Culture and Celebs! Ladies and gentlemen, may I say it was like rolling the dice to see if I get snake eyes or perhaps 2 sixes you know?

What I mean by that, I was thinking to myself, I wonder WHO will outweigh the other in the topics that occupy the Top 100 of the Squidoo Pop Culture and Celebs topic / category. Will it be Lady GaGa or will it be Megan Fox?  Gosh, and wouldn't that be a great Hey Monkeybrain debate folks?  That is, Lady GaGa or Megan Fox -- Who is the Bigger POP Star?

Take a look at the first Wordle tag cloud:

Well, "Actress" was really popping out at me along with "Tattoos" ... so I opted to do a "scrub" of those titles in the Top 100 of the Squidoo Pop Culture and Celebs topic / category to see if we could zoom in on either Lady GaGa or will it be Megan Fox? Take a look at this second Wordle.

Yeah, yeah, I know! Tattoos are popping out at us. Oh gosh, YOU must surely know that I've talked about tattoos if only to do a singular Squidoo lens to debate Twitter vs. Tattoo -- Which is MORE Popular?

So, after the big old Tattoos, I'm seeing Lady next followed closely on her heels by Gaga AND Megan.  I honestly can't tell if one lady has the edge over the other one!  We can also detect Celebrity, Fashion, Twilight, Newest and Character along with a host of other topicable words/topics!  Wow, how cool to see so many topicable hot pop topics!  I enjoyed that.

Today’s Squidoo lensmaster in the spotlight is xtnshun! Congratulations to xtnshun for snagging 20 spots in the Top 100 of the Pop Culture and Celebs Topic on Squidoo! That’s quite an accomplishment. 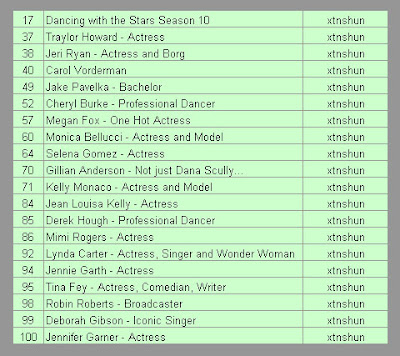 The next group of Squidoo lensmasters in the spotlight include wwkeen with 6 lenses; Tipi with 5, lou16 with 4, and both kab and wishfulthinking777 have 3 lenses in the Top 100 of the Pop Culture and Celebs Topic on Squidoo!

You have probably picked up on the fact that I have been profiling the Top 100 of the various Squidoo Topics.  Here are the rest of the topics that have been profiled on the Topicability blog:

I've profiled the top Squidoo lens, for more than a year on a special Squidoo lens, Squidoo du Jour -- The Top Lens, in case you are curious what's been on top overall. Or, maybe you are wanting to participate in my Hey Monkeybrain debate about Squidoo Stats -- Public or Private?