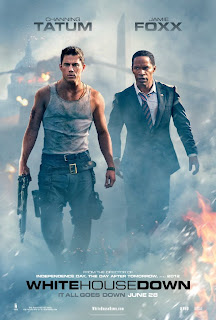 We didn't intentionally go to see White House Down on the day before the 4th of July. I just happened to notice when I looked at the movie listings that it was down to a couple of showings a day, meaning that it was now or never if we wanted to see it in the theater. There are some movies that are pretty much the same at home or in the theater, but there are others that require the big screen for the full experience. We suspected that White House Down was one of those, and that turned out to be truer than I'd imagined.

As you've heard me say before about many a couple of movies that I went to see because my daughter really wanted to, I wasn't especially optimistic going into this one.  My previous experience with Channing Tatum consisted of The Vow (okay), 21 Jump Street (funny, but this wasn't a funny movie) and Magic Mike (ugh). I'd heard that he'd held his own as an action hero in G.I. Joe, but I'd heard it from a teenager and really...in my mind G.I. Joe was Barbie's boyfriend and not exactly action hero material himself.

And Jamie Fox as the President of the United States? Really?

Joey King would have given me more hope for this film than anyone else in the line-up, except that I didn't know she was in it until I turned up in the theater. She didn't disappoint me, but, surprisingly enough, neither did anyone else. The film isn't going to win anyone an Oscar, but it did a credible job of conveying the urgency associated with the sort of national crisis portrayed, and the fragility of both the structure that protects our way of life and the chain of command at the very top. And, it offered a flash of how "normal" has changed in the world of iPhones and social media.

Sure, much of the action was over the top and unrealistic, but the movie made no pretenses about that--one newscaster in the film wryly commented, "There's something you don't see every day" as the President took up a hand-held rocket launcher and fired it out the window of a car on the lawn of the White House. There was plenty to laugh at, but the laughter was well-placed in what was otherwise a high-tension story.  I laughed, I spent a few moments on the edge of my seat and, all in all, I cared whether most of the main characters survived the day. In the purely-entertainment arena, that's all I can ask for.