Why The Debate On Trade Should Worry Development Communities

Trade has assumed a remarkably prominent position in the US presidential election. In past elections, few topics seemed to dull public attention like tariffs and trade barriers, which meant that politicians typically focused on divisive social issues like abortion and gun control.

But trade isn't the clear-cut issue cleanly divided along partisan lines that abortion and gun control are. It featured as much as a core theme in Donald Trump's campaign as it did in Bernie Sanders' run for Democratic nominee. Both candidates used it to appeal across their voter bases, from small manufacturing business owners to unemployed autoworkers. The focus on trade has been such an effective strategy that it's even forced Hillary Clinton to reverse her once-strong support of the Trans-Pacific Partnership (TPP) and Transatlantic Trade and Investment Partnership (TTIP).

Clearly, the debate on trade has proved constructive in a number of ways. It's highlighted the compromises made on behalf of unfettered globalization, and become a touchstone for the rising inequality it has helped produce. It's also sparked a much-needed re-examination of the implications of multilateral trade deals like the TPP and TTIP.

But the trade debate has also provoked a knee-jerk reaction intent on vilifying anything remotely free-trade oriented. Indeed, Trump has gone as far as comparing the ratification of TPP to the rape of our country. One of the problems with demonizing trade is where to draw the line, since it's such a populist crowd pleaser. But reframing trade under this kind of polarizing language should worry development communities. A sudden shift toward protectionist policies combined with a preference for bilateral deals could carry unintended consequences for the kind of trade that has helped sustain developing countries.

In other words, the backlash against trade could end up backfiring for ideas like fair trade. By fair trade, I'm not referring to Trump's use of the term. His anti-free trade movement recasts itself partly by appropriating the language of fair trade. Though Trump routinely insists on a policy of "fair trade, not free trade", the fact is that his trade proposals represent little more than a throwback to 17th century mercantilism--a zero-sum system where economic gains are made only at the expense of others.

What I mean by fair trade is the movement started in the 1960s that attempts to address trade inequities between developed and developing countries. By establishing better trade terms like price supports as well as improved labor conditions and environmental standards, fair trade can sustain smallholder farmers in less developed countries.

So it's worth considering what could happen to fair trade in a scenario where greater protectionism points to less free trade. Over the last 15 years, fair trade has grown significantly. In 2014 alone, global fair trade sales generated almost $8 billion. Of that figure, the US accounts for almost 13% or $1 billion dollars of world fair trade, up significantly from 2012 when it accounted for only 1%, according to Fair Trade International.

But while fair trade represents a fraction of global trade, it remains highly correlated to the growth of overall trade. The correlation suggests that, all else being equal, the fate of fair trade is tied to what a new age of protectionism--whether under Trump or otherwise--would mean for the fate of free trade. Which is why any sudden change in US trade policy is bound to have some side effect that also impacts US fair trade sales. 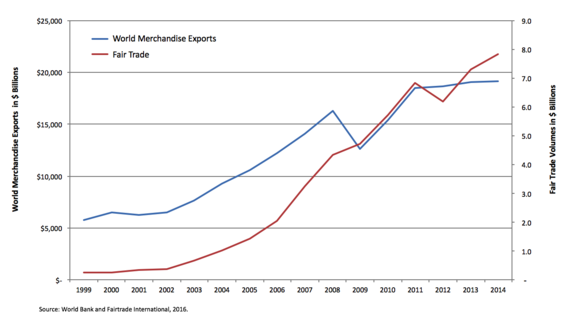 If we allow protectionism to define trading relationships, fair trade is at risk of becoming collateral damage. And any fallout from the US is bound to have a significant impact on the communities that fair trade helps to sustain. In short, if the current anti-free trade debate means less free trade, there's a good chance that US fair trade sales also get hurt.

Worryingly, the neo-mercantilist turn isn't unique to US politics either. Britain's vote to leave the European Union--which was as much about globalization pressures as Trump's campaign platform--appears to borrow from the Trump deal-making playbook. Theresa May's new International Development Secretary, Priti Patel, announced her intention to "leverage" Britain's £11 billion foreign aid budget in order to negotiate better trade deals. The development community should wonder what exactly "leveraging" means for developing countries partially dependent on foreign aid. Does it mean withholding aid to fight the Zika epidemic unless trade tariffs are lowered? What about those that need aid but offer less trade to leverage?

It may sound far-fetched, but the combination of Trump's neo-mercantilist threats and Patel's plan to get more trade benefits for British foreign aid even conjure up old imperialist fears about the core--developed countries like the US and the UK--controlling the periphery--developing countries--via trade. If the new rules of trade dictate bilateral over multilateral deals in a zero-sum game, why would smaller developing countries dependent on fair trade expect to remain unscathed? After all, if Trump is really serious about his pledge to reverse the US trade deficit and punish foreign countries who are killing us on trade, it can only mean that net exporters to the US--starting with China and Mexico, but including other developing countries--will have to shoulder this readjustment.

So while we may fight over the terms of multilateral deals, wholeheartedly rejecting the idea of free trade creates greater risk that we veer towards protectionism. Rules-based systems like the WTO not only tend to be remarkably resilient, but they provide useful building blocks towards better collective--less discriminating--deals. They don't protect everyone: it'd be unrealistic to imagine they ever could. But they do try to prevent another problem that bilateral deals would be quick to capitalize on: a race to the bottom on issues like labor conditions and environmental standards simply to attract trade flows and foreign investment.

If, for instance, the US shies away from ratifying or much less renegotiating TPP, the remaining eleven signatories may simply replace the US with China. Assuming China participates, the new group of twelve would still account for a third of the world's economy. But it would also mean that the development communities lose out on the US's absent role in establishing strong labor conditions and environmental standards--a key for developing country signatories like Vietnam, Malaysia, Chile, Peru, Brunei and Mexico. Indeed, many developing countries are on the front line of climate change's effects, and need recognized safeguards at the multilateral level.

Joseph Stiglitz rightly points out the hidden costs and lack of environmental provisions in the existing TPP terms, noting that trade is unsustainable "...if firms are not required to pay the environmental costs they impose on society, which also present an existent threat to life on this planet." It's a criticism also echoed by Naomi Klein. Clearly, there's more work to be done to produce a transparently negotiated trade agreement that resolves the issues on intellectual property and multinational interests. But the alternative--Trump's proposal to replace multilateral deals with bilateral ones--will inevitably lead down a road of discriminatory trade and weaker environmental and labor standards.

Fair traders often point to Adam Smith's Moral Sentiments, "...to see that both parties come out fairly" as a means to bridge free and fair trade towards a more humanistic, equitable form of capitalism. Ironically, many of the mercantilist problems that Smith believed capitalism was replacing are now reappearing. It's hard to imagine that Trump's Art of the Deal and Patel's comments can survive a system of congressional and parliamentary checks and balances. Still, let's hope that free trade doesn't become so demonized that it ends up hurting areas like fair trade that have helped address global trade inequities.