Why has Australia prospered much more than Argentina?

blogcatalog
In the first half of the 19th Century the Australian and Argentinian economies were similar in many respects. Both countries were being settled by European migrants and their economies were heavily dependent on pastoral activities. Around 1900, per capita GDP levels in Argentina were thought to be not far below those in Australia (see the chart below). Since then, while Australia has prospered to much the same extent as other relatively wealthy countries, Argentina has slipped behind. 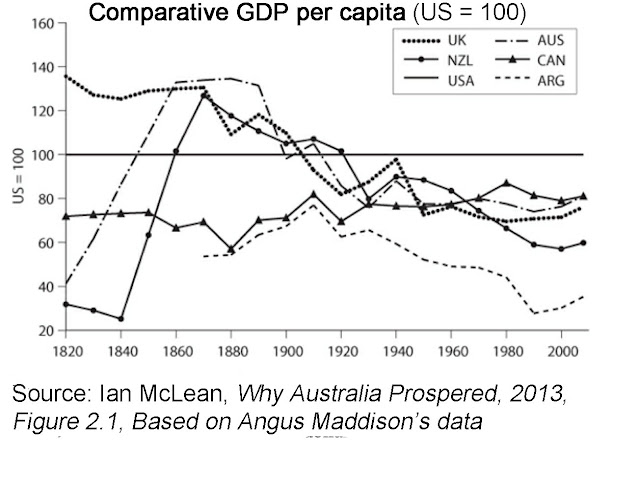 Ian McLean’s attempt to explain why Australians have prospered to a much greater extent than Argentinians is to my mind the most interesting feature of his book, Why Australia Prospered (2013).

Part of Ian’s explanation did not come as a surprise to me, but nevertheless deserves to be repeated - often! There have been periods during the last century when inappropriate institutions and policies have threatened to retard the improvement of Australian living standards (e.g. the 1970s) but long-run stagnation was avoided because appropriate economic reforms were made and sustained. As Ian comments: “This contrasts with the historical record of Argentina” (p 252).

A deeper, and more novel, aspect of Ian’s explanation is his speculation that the past willingness of Australians to change institutional arrangements when future prosperity has been threatened is linked to the emergence among 19th century Australians of a democratic and egalitarian temperament, and its persistence since then. Ian notes that there were strong economic forces opposed to the emergence of such culture in Australia because the initial distribution of ownership of pastoral land - the principal basis of wealth in the economy - was highly unequal. In terms of the analysis of Stanley Engerman and Kenneth Sokolov, the economic power acquired by the wealthy elite could have been expected to have been employed to shape political and social institutions as occurred in Latin American countries, entrenching inequality and resulting in ongoing growth-stunting distributional conflict. According to Ian’s speculations, Australia avoided a long period of squattocracy (oligarchic government by wealthy land owners) only because the British were still in control at the critical point in the 1850s and were able to determine the nature and timing of self-government.
This story challenges some of my preconceptions. I like to think of the squatters as heroes of free enterprise rather than as oligarchic rent-seekers. But I guess few humans are able to resist the temptation to exercise political power in their own interests when the opportunity presents itself. The squatters would have had little difficulty in believing that they were serving the common good by seeking to entrench their dubious property rights and encourage ongoing importation of cheap labour for use on their properties.
The idea that the British government was acting in Australia as an enlightened force promoting democratic ideals might require some explanation.  Ian points out that British attitudes and policies towards the colonies had been shaped by the loss of American colonies and by political instability in Canada. He also notes the existence of domestic pressures for institutional change:
“The attitudes and aspirations of the flood of immigrants arriving after the discovery of gold reflected those of mid-Victorian Britain where reform of the corrupt and class-based political system and concern at social and economic inequalities were much in evidence” (p 252).
Ian McLean’s account of Australian economic history shows that it would be as difficult to sustain the view that Australia has prospered because the heroes of free enterprise have consistently won political battles against the proponents of egalitarianism, as it would be to sustain the view that Australia has prospered because government interventions have consistently been benign in this country. Early establishment of democratic institutions seems to have acted as an important safety valve reducing the potential for distributional conflict, even though it brought with it restrictions on economic freedom, such as trade protectionism, that were later to hinder economic growth. Over the long term, a democratic and egalitarian culture has so far helped Australians to restore and maintain sufficient economic freedom to ensure their ongoing prosperity.
We use cookies to improve user experience, remember your preferences, and analyze website traffic. By continuing to browse this website, you consent to our use of cookies as outlined in our Privacy Policy.