During my initial exploration of the cycling route that we now know as ‘the journey to the west’, perhaps the most bizarre discovery—and nothing to do with cycling—was a strange house that we passed on the outward journey. At the time, it reminded me of the story of Hansel and Gretel, in which, if you recall, the two children are abandoned in the depths of a forest at the behest of their evil stepmother. They come across a house made from gingerbread and other sweet things, and being hungry, they start to eat. However, it turns out that the house belongs to a wicked witch who likes to eat children. This is the photograph that I posted in Journey to the West: Part 2: 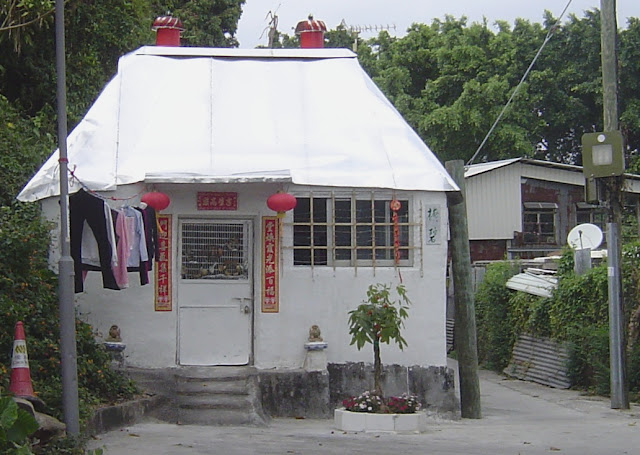 It was taken on 15th February 2013. I mention the date because the open space in front of the house is our first stop to drink some water whenever we pass this way, and I’ve been taking photographs of the house from time to time since then. I should emphasize that the owner of the house may not have heard of Hansel and Gretel, or the western tradition of wicked witches, but the decorations I’ve recorded are not in a conventional Chinese style either. Decide for yourself.

I’ve included the next photo, taken in December 2013, only because some kind of work is being done to the left of the house, the results of which will be seen in later photos. 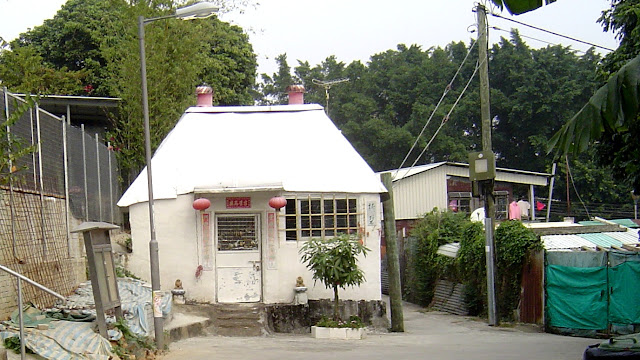 I didn’t take any photographs of the house in 2014, but on 7th February 2015, I shot the following three images: 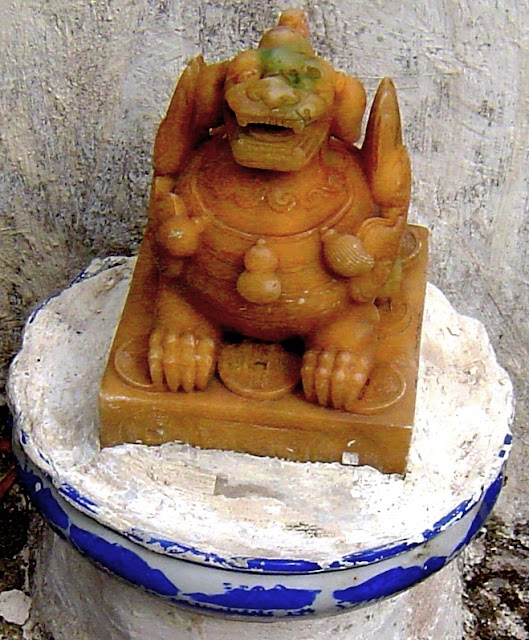 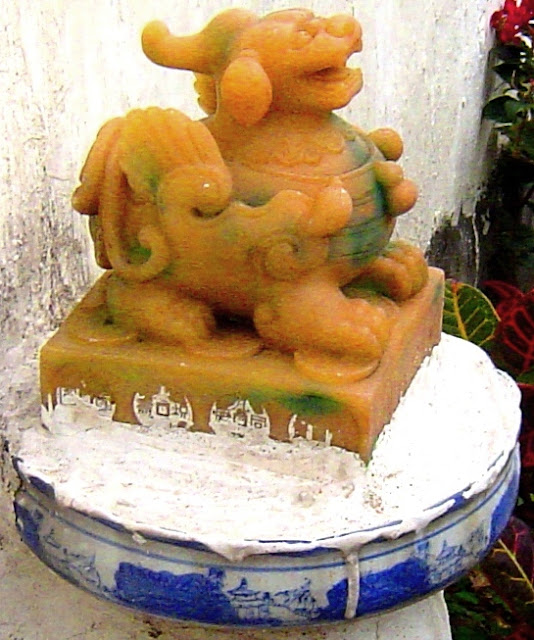 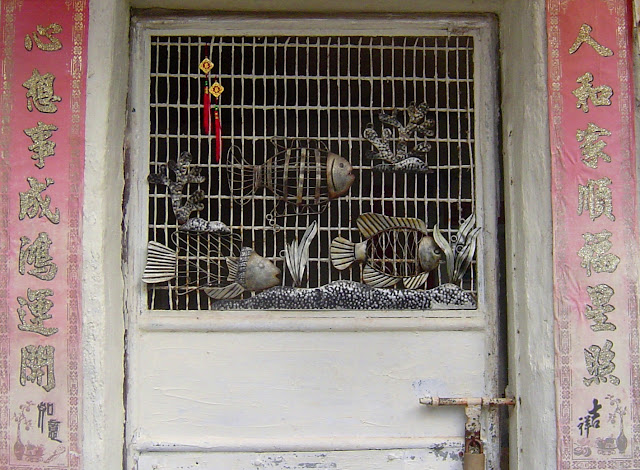 The first two are close-ups of the jadeite animals on either side of the door. They may be dragons, but I suspect that they are other mythical beasts. The third image is a close-up of the door. The Chinese words for ‘fish’ and ‘longevity’ are homophones, which should explain the presence of these metallic pisceans. An approximate translation of the writing on the right is ‘harmony at home will bring blessings and good fortune’, while that on the left translates as ‘whatever you wish will come true, and good luck will arrive’.

The next photo was taken on 21st March 2013. Note that the construction area is now a neatly planted miniature garden with Christmas tree decorations that are hanging from the plants. Note too that the colour of the painted ‘chimneys’ has faded away. The string of red paper cylinders topped by an octagonal box is a fake string of firecrackers and is a traditional decoration at Chinese New Year. 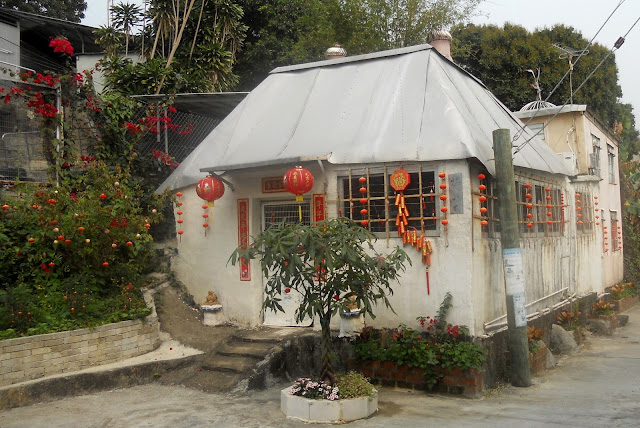 I didn’t take any more photographs of the house until January this year. The next two images were taken on the 2nd and 30th of the month, respectively. The second photo marks the first appearance of a huge ceramic teapot atop the post on the right-hand corner of the house. 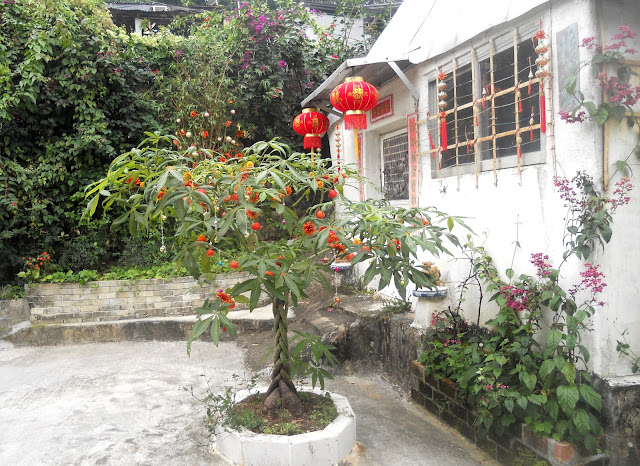 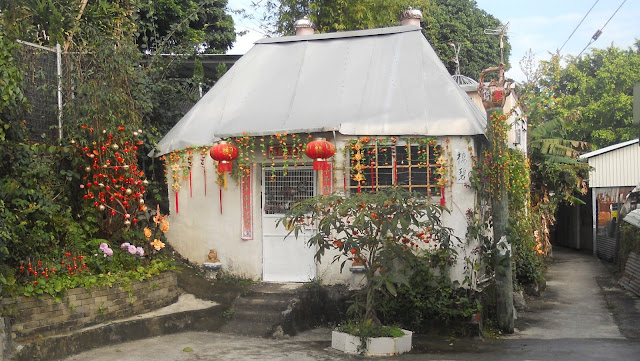 The two previous photos were taken before Chinese New Year, while the next was taken after the festival, on 19th February. More decorations have appeared, including on the government notice boards on the left: 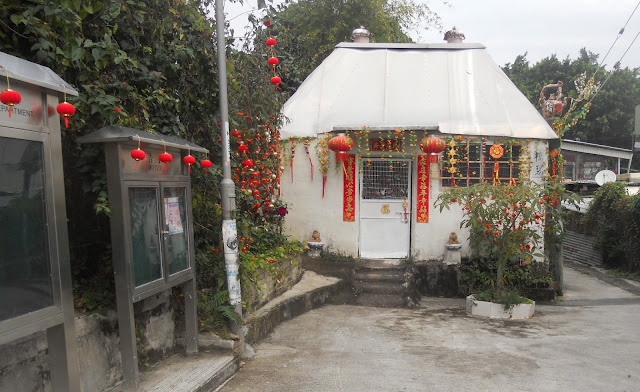 The next photo, taken on 25th March 2016, marks the first appearance of two ceramic birds on the ledge above the door: 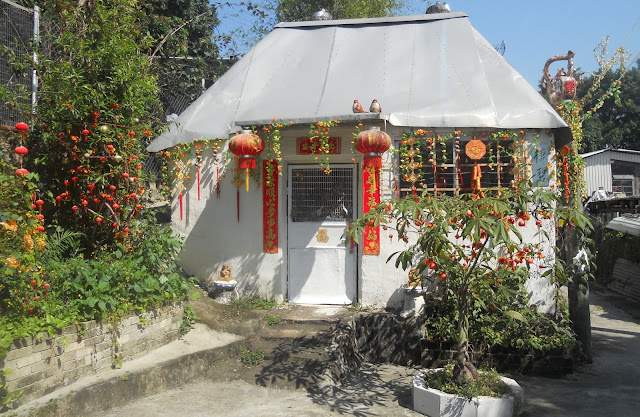 A closer view of the ceramic birds, teapot and other features is provided by the next image. The flowers and creepers on the diagonal wires above and right of the teapot are fake. The writing on the teapot alludes to luck and blessings coming true, while the two characters to the right of the window appear to be someone’s name. 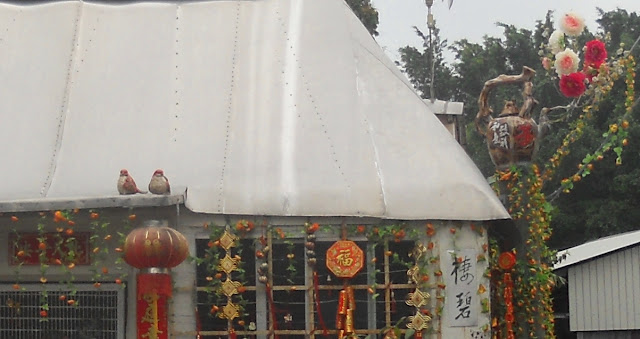 I was prompted to write this post by Paula’s recent comment, that the overgrown mini-garden on the left of the house had been cut back, and we could now see the table and seats. It was only when I was looking through old photographs for ones that I needed for another post I’m working on that I realized the table and seats are a new addition. 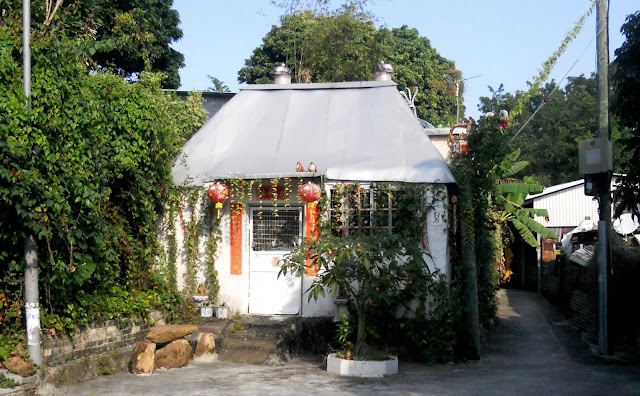 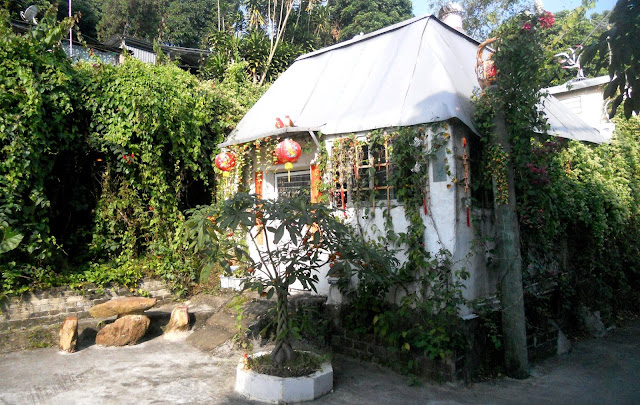 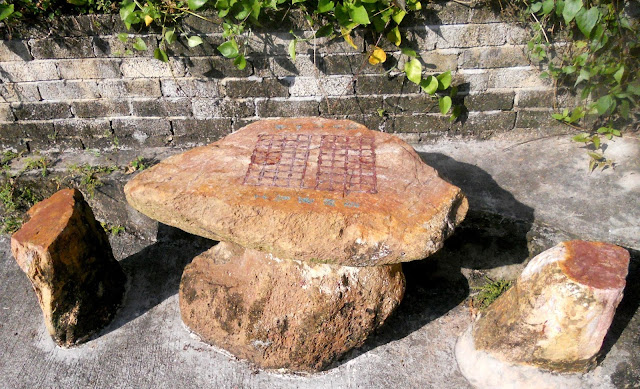 You will see that the miniature garden remains overgrown, and the right-hand side of the house has been engulfed by mile-a-minute, a particularly invasive vine. The rock table has a Chinese chess board engraved on its surface, but I don’t plan to stop off for a game. I learned many years ago never to play Chinese chess in public, mainly because most onlookers cannot believe that a gweilo would know how to play and therefore feel obliged to offer advice on what move to make next. That advice is invariably wrong. The same principle applies to mah jong, which most Chinese know how to play, but very few know how to play well.

I feel sure that it will be necessary to update this post at some time in the future.