When I let too much time pass without posting on a blog, I start to feel like I need something really momentous to break my silence--and, that often means that I don't post for months. Or, in this case, a little over a year.

I'm going to show him to you in a minute--he's incredibly beautiful--but first I want to tell you a little about Jesse's arrival.

That means he was only 24 weeks in the making when he made his very unexpected arrival into the world at 4:25 a.m. on December 13. He weighed 1 pound, 15 ounces. His mom, who has been one of my closest friends for years, went straight into surgery after his birth.

If this all sounds terrifying to you, you're not alone. It's been a very intense few days. He's in an incubator, on a ventilator and getting blood transfusions.

Don't worry. There's a lot of good news, too. But first, take a look at him. 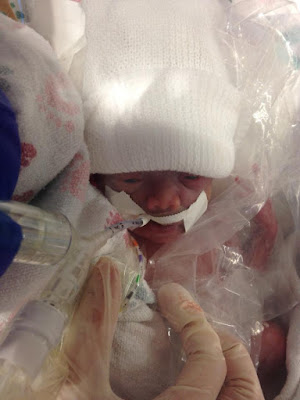 See how he has all those tiny, perfect features? Aren't you a little in love with him already? No? Just me? (I don't even believe you.)

So, here's some of the good news:

His mom is fine and home already.

He's in day four as I write this. Four days! That means he made it through the trauma of being born unexpectedly AND through the transition where he lost mom's hormones and immunities and had to fend for himself...and he's still kicking.

He IS kicking. And waving his arms. He may look like a sparrow, but this kid has SPIRIT. Maybe it's not entirely good news that he's trying to pull out his breathing tube and push the protective pads off of his eyes, but...it kind of is, isn't it? He's putting up a fight. We need that.

Of course, there are a lot of challenges ahead, and a lot of unanswered questions right now. So, if you're the praying type, please consider adding Jesse to your intentions. If you happen to have a prayer circle or Bible study or just a group of friends or family you can ask to do the same, please do. If you're not religious and you have some positive energy or intentions to the universe or any type of good vibrations at all, we'd welcome them, and so would his moms.

The kid is putting in a valiant effort, but you can't do it all on your own when you weigh less than two pounds...or when you've just given birth to someone who does.

Read the next update here.