Writer’s Block: Blame It On Trump! 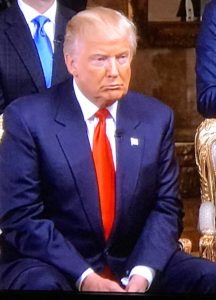 This morning, I had every intention of writing a blog post but that same old dread enveloped me like a noxious fog — President-Elect Trump.

I tried to calm myself by meditating: ohm, ohm… Oh, my God, President-Elect Trump.

I tried taking a walk to get inspired: Trees, birds… President-Elect Trump.

I’ve got nothing. I said. Any thoughts? I asked Myself, usually a very good listener and purveyor of advice.

But Myself wasn’t helpful this time.

“I don’t know,” Myself said introspectively. “Maybe write something about Trump.”

“But that’s depressing,” I responded. “Thinking about Trump makes me grumpy, or dare I say, Trumpy. You know I haven’t written anything in months because of Trump.”

Myself just sighed. She knew that Trump’s bigotry and off-the-rail comments had stifled my creativity and provoked me to yell at inanimate objects…

Objects, like the shoe I tripped over, became the focus of my anger. “What the fuck, shoe!” I yelled. “Are you trying to kill me?”

The shoe offered a laced up rebuke. “You left me here,” it said. “… abandoned me like all the ideas you’ve scribbled on torn pages in your notebook. This one’s on you, missy!”

“But, but…” I stammered. But, there were no more buts. The shoe was right — literally. I had no business yelling at anything and then went on an apology tour of the house, expressing my regrets to all the furniture I had abused.

I realized that being depressed and stuck is exactly what a bully would want from the ladies he’s grabbed by the pussy, metaphorically or figuratively. It doesn’t matter. If I allow Trump to victimize me from afar, my voice will be silenced — exactly what Trump would want.

And so I’ll try my best not to get Trumped and write rants in run-on sentences that only end with applause. I know it upsets my blog. I can see it every time it stares at me blankly, trembling when I look at it with protruding cartoon eyes.

At which point, the sidearm of my chair tapped me on the shoulder and said. “Your blog is trembling because you’re shaking the monitor. Let go of it!”

I unclenched my white knuckles and apologized AGAIN, “Sorry, blog!” then took a deep breath and wiped my fingerprints from the screen.

Wowza! This anger thing is unconscious and scary pervasive. I need to get a grip, without getting a grip.

The only way to do that is to purge my thoughts and write — But write about what? Puppies or politics?

I love puppies but their cuteness is wasted on words, captured best in video or pictures.

I love politics but lately just see that giant orange burrito spew guacamole all over the news. Every time I see Trump on TV, I want to take boxes of Ortega Tacos and smash them in the compactor.

No, I need a Trumpectomy, to turn off the TV and get Trump out of my head. Once there’s nothing left of him, I’ll be able to write again.

Now, if I only could think of something to write about.

Has your writing been Trumped?