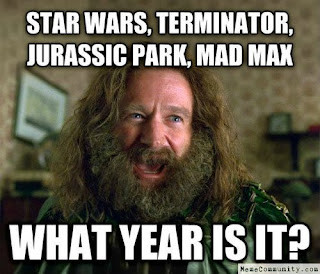 While ruling out a torn cruciate ligament via MRI, Doctor Gudenstont found a bullet my ankle.  Getting it non-surgically reduced requires a series of injections, so I'll be home for a few weeks.

Of the hundreds of screeners I haven't watched, I picked "Terminator:Genysis." Why I could not tell you.  But an hour in, I found myself seething in a blind rage.  I wanted to burn down the theater.  The fact I couldn't because I live here only redoubled my frustration.  After a ceremony to appease various gods, now I have to watch this steaming crap at a friends house, and then burn that place down.

Gina pulled up as I was returning the can of gasoline to the shed.

"If the bad terminators only need to kill Reece or Sarah Connor," I bark, "why do they spent the whole damn movie fighting with Arnold Schwarzenegger?"

"What? "asks Gina, still getting out of the car.  "Is that gasoline?"

"Give me a hand with this," I says, wobbling clumsily on my cane.  "I have a bullet in my leg."

"You have a cyst in your ankle," she corrects.

"Everyone knows 'cyst' is a medical euphemism for 'bullet.'" I argue.  "They do that for insurance reasons."

"The oil change guy wanted to charge me forty dollars for windshield wipers," she says.  "Can you imagine?  This car isn't even a year old."

I hesitate.  "I've been meaning to mention that.  Your windshield wipers are an eyesore.  The neighbors are talking.  This can't go on."

"Is it?" I says.  "Every day you pull up with those droll windshield wipers, I have to go into damage control.  It's fine that you are making some hippie statement.  But don't think I don't suffer the consequences."

For some reason, I'm not allowed to have a shed key anymore.