The Year of the Snow Bunny 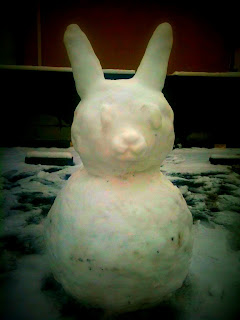 This is the year of the rabbit, according to the Chinese calendar.  We woke up the other day to a snow covered scene that excited the girls.  Even more exciting was the mysterious snow bunny left in the parking lot in front of our house.  Whoever made it took a lot of time and effort to do so.  The facial features were quite detailed and if you look at the photos it is quite large.  I imagine that took a few hours of the early morning to make.
Anyway it was a surprise, seeing that we do not get much snow in winter time.  But this winter has certainly been a long and cold one, and we are awaiting its end, eagerly. 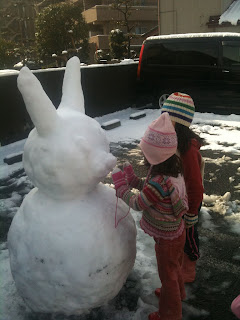 Interesting to note the strong cultural ties between China and Japan in reference to such things as superstitions, astrology, and other mystical traditions.

However, all mysticism aside, to be honest I really hope this year is indeed a rest from the storm of raising the girls in the midst of many other struggles.

So here`s to a new year, already underway! May it be a good year for all of you as well! 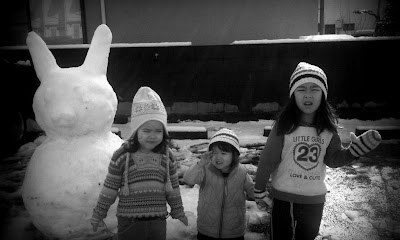